Sanford Stadium on Saturday afternoon hosts a top 10 matchup between the #6 Georgia Southern Eagles and #5 Georgia Bulldogs.  Of course, the Eagles are ranked #6 in I-AA as opposed to D1, but we’ll play them while Tech won’t.  The spirit of Erk will be present as the two programs that he spent his adult life bleeding for square off between the hedges.  Due to the tie between the programs, this game is not your typical rent-a-win game against a I-AA opponent.  While GSU hasn’t won a match-up with a D1 opponent, they have been pesky over the years with the big boys in the Southeast.  Let’s get to the breakdown.

When GSU Has the Ball 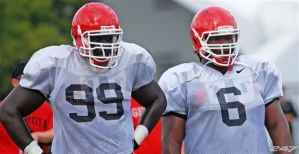 As everyone knows, GSU has built their program from the beginning around the Hambone triple option attack now run by the service academies and Georgia Tech.  They are who they are and have done it very well over the years.  The key to controlling the triple option whether in the form of Bear Bryant’s wishbone, Tom Osborne’s I-option, or GSU’s flexbone is to stop the fullback dive.  Therefore, John Jenkins and Kwame Geathers need to be able to plug the middle to take away the consistent threat of the dive to start the option.  It’s necessary to push the option out to the edge to allow our defensive team speed to corral the quarterback and the pitch.

When Georgia Has the Ball

The Georgia offense should be able to handle the GSU front 7 due to our size advantage across the line of scrimmage.  Therefore, I’m looking for Gurshall to have a big day of running the football and piling up yardage.  I really only think the only thing that can stop the Georgia offense is likely the Georgia offense with execution mistakes, penalties and turnovers.  Plays should be available in both the passing and running game as we present a nightmare of match-up problems for the Eagle defense.

The Dawgs will win this game going away and the only unknown is the final margin, which is definitely important this time of the year for the polls and the computers.  The Dawgs get control of the game early, but let off the gas to protect defensive players for Old Fashioned Hate next Saturday.  GSU scores a touchdown or two later in the game to make it look closer than the game really will be.

This entry was posted in Georgia Sports. Bookmark the permalink.