“Offense sells tickets.  Defense wins championships.”  With the return of 10 starters from a top 5 defense last year, the 2012 edition of the Junkyard Dawgs has a chance to lead this team to a championship.  If they can survive early season suspensions in the secondary, this defense has the opportunity to set the standard for defenses to follow in their footsteps.

The Georgia defensive line anchored by John Jenkins and Kwame Geathers at nose tackle is deep and talented.  These two cause headaches for opposing offensive line coaches due to their size (340+ pounds each) and their athleticism (both can rush the passer).  They can stay in the game against spread teams and are space eaters against power running teams.  Senior Abry Jones is one of the unsung leaders of this team at one defensive end spot with Cornelius Washington likely to man the other end spot to rush the passer.  Garrison Smith, who starred in the Tech game last year in place of the injured DeAngelo Tyson, and Ray Drew (the Pastor of Disaster) give the front three a two-deep depth chart that can compete with anyone.  The nightmare scenario is that one of the two nose tackles gets injured for an extended period and we have trouble defending between the tackles as we did in 2010.

Linebackers (Outlook – Off the Charts Positive) 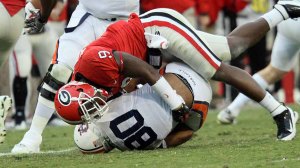 While All-American and Butkus Award finalist Jarvis Jones deservedly gets most of the ink for the Bulldog linebacking corps, Alec Ogletree may be the best athlete of the bunch.  His ferocious hitting and ability to line up all over the field remind me of a young Thomas Davis.  Grantham will put him inside and outside depending on down and distance and allow him to roam the field to make plays.  With Jones, Mike Gilliard, and Ramik Wilson on the field with Christian Robinson and Amarlo Herrera playing a lot and future star Jordan Jenkins ready to contribute, this group of linebackers has a combination of size and speed that should be able to set the edge and control teams’ ability to run the ball with any consistency.  The big question is how long will we wait to see Ogletree on the field (Missouri or FAU).

The Georgia secondary early in the season has to be the other unknown of this team along with the offensive line and the kicking specialists.  Due to the known suspension of Sanders Commings and the expected suspension of All-American Bacarri Rambo, this unit will have its collective hands full in Columbia, Missouri on September 8 with Mizzou’s spread offense.  If Malcolm Mitchell performs as expected, this secondary will have three lockdown corners in Branden Smith, Commings, and Mitchell when the defense is back to full strength.  Don’t forget Dream Teamers Damian Swann and Devin Bowman who both will play early and often this fall.  At safety, Rambo gets the publicity for his name and his knack of making big plays, but Shawn Williams is an absolute stud as his running mate.  Depth is solid at the safety position as well with Dream Teamer Corey Moore and super-recruit Josh Harvey-Clemons. 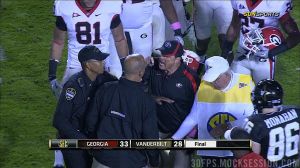 Two years ago, many people (including me) had little idea who Todd Grantham was and whether he was the right choice as the defensive coordinator to replace The Defensive Coordinator Who Must Not Be Named.  Now, many in the Bulldog Nation have anointed him as HCIW.  Grantham has brought an edge to Georgia defensively that hasn’t been seen since a certain man’s bald head bled on the Sanford Stadium sod.  He has proven to be a coach that has been willing to learn how to scheme against college offenses, is a relentless recruiter, and seems to enjoy interacting with the Bulldog faithful.  His defensive staff of Garner, Olivadotti, and Lakatos has a great mix of recruiters, NFL experience, and X-and-O guys.

This defense has the makings to become the best in the modern era of Georgia football.  I know that sounds like a delusional Georgia fan, but this defense doesn’t have a noticeable weakness to be exploited unless the injury bug decimates us.  The only unknown is the impact of early season suspensions on the secondary against Missouri.  If Georgia escapes Columbia with a win, this defense could make the 2012 season one for the ages.

Tell me your thoughts in the comments.