It’s beginning to look a lot like LSU and Alabama are clearly the two best teams in college football.  The questions are now going to start in a couple of weeks if the game in T-town is close whether the BCS could end up with a rematch in New Orleans for the national championship.  Right now, I believe that we are going to end up with 3 unbeatens at the end of the regular season (Alabama/LSU winner, Boise State, Clemson). 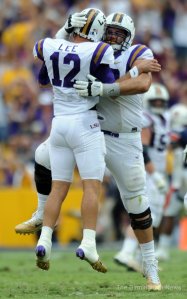 LSU – The Tigers continue not just to win but to win in a dominating fashion.  The Bayou Bengals just destroyed the Tigers/War Eagles/Plainsmen in Baton Rouge in preparation for the T-town Showdown in two weeks.  The hype over this game on the Finebaum radio show is going to be worse than any Super Bowl.

The Rest of the Top 10 (in no particular order)

Alabama – The Tide struggled with Tennessee in the 3rd Saturday in October for a half.  They came out in the 3rd quarter and just dominated the Volunteers with a quick strike offense.  The game was officially over when it looked like the Vol defense just gave up on Trent Richardson’s touchdown run.

Oklahoma – The Sooners lose to a Tommy Tuberville coached team on their home field.  While the Sooners still control their own destiny in the Big 1+, they could be out of the national championship hunt if Clemson in particular runs the table including the ACC championship game.  Sooner fans, say hello to Glendale at best again.

Boise State – The Smurfs struggle with Air Force but win and advance.  I don’t believe they can play with either LSU or Alabama across both lines of scrimmage, but I also didn’t think they could on September 3 in the Georgia Dome.  Potato Nation has to hope that Georgia wins out including an epic upset in the SEC championship game.  Sorry, Boise, the SEC office of officials run by Georgia Tech graduates will never let that happen.

Stanford – The Cardinal just whipped Washington last night in Palo Alto by piling up over 400 yards rushing.  The crowd at Stanford Stadium last night looked like it was pitiful.  If an SEC school had this team, their home games would be toughest ticket in the whole state.  Their mascot is absolutely the worst in all of sports.

Oklahoma State – The Pokes continue to win by beating what appears to be the SEC’s 14th team, Missouri.  They’re probably going to be #3 in the BCS standings this week, but I have this nagging feeling that the Sooners are going to ruin their season in T. Boone Pickens Stadium at Bedlam.

Clemson – The road crew orange Tigers appear to have a clear path to an unbeaten season on the banks of Lake Hartwell.  Tajh Boyd is the real deal at quarterback.  I just don’t think the Tigers have the defense to control either Bama or LSU.  Georgia Tech’s triple option will test the Tigers’ defense.

Wisconsin – The Badgers had a great comeback in the 2nd half against Sparty just to lose on a Hail Mary pass at the end of regulation.  Two blocked kicks in the 1st half were the real difference including a blocked punt that gave Michigan State a cheap touchdown right before the half.

Oregon – The Ducks just continue to roll with a 45-2 win against Colorado.  The game with Stanford is measuring up to be a classic match-up on finesse against power.  Right now, I think Oregon may have the edge because of all of the skill players they put on the field.

Kansas State – Arkansas fell out of my top 10 after their struggle with a bad Ole Miss team.  I considered taking Wisconsin out of the top 10 as well but couldn’t find a team that was worthy to replace them.  I don’t know how good the Wildcats are, but we’ll find out quickly when they take on the Sooners.

This entry was posted in Mumme Poll. Bookmark the permalink.